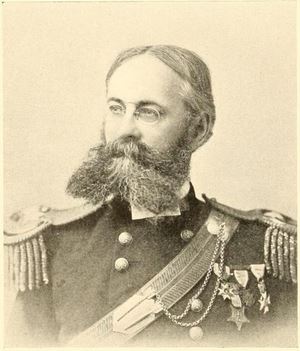 Adolphus Washington Greely (March 27, 1844 – October 20, 1935) was a United States Army officer and polar explorer. He attained the rank of major general and was a recipient of the Medal of Honor.

A native of Newburyport, Massachusetts and an 1860 graduate of Brown High School (now Newburyport High School), in 1861 he enlisted in the Union Army for the American Civil War. He received his commission as a second lieutenant in 1863 and was promoted to first lieutenant in 1864 and captain in 1865. At the end of the war he received a brevet promotion to major in recognition of his wartime accomplishments.

After the war, Greely accepted a second lieutenant's commission in the regular army. In 1881, he was appointed to command the Lady Franklin Bay Expedition, a 25-man expedition organized to carry out Arctic explorations. The expedition ran short of food and several resupply and rescue missions were unsuccessful, and by the time Greely and his men were rescued in 1884, there were only six survivors.

In March 1887, Greely was serving as a captain when President Grover Cleveland appointed him as the Army's Chief Signal Officer with the rank of brigadier general. As Signal chief, he was responsible for creating and maintaining the worldwide communications networks required during and after the Spanish–American War and during the Philippine–American War. Greely was promoted to major general in February 1906. In April 1906, he was assigned to command relief efforts following the San Francisco earthquake. Greely left the Army in 1908 after reaching the mandatory retirement age of 64.

In retirement, Greely authored numerous magazine articles and books on his Arctic experiences. In March 1935, he was awarded the Medal of Honor in recognition of "his life of splendid public service." Greely died in Washington, D.C. on October 20, 1935. He was buried at Arlington National Cemetery. Provided by Wikipedia
Showing 1 - 20 results of 60 for search 'Greely, Adolphus', query time: 0.02s Refine Results
List   Grid   Visual
Search Tools: Get RSS Feed